FOR IMMEDIATE RELEASE AND DISTRIBUTION:

Pennsylvania Federation of Sportsmen and Conservationists presented Senator James R. Brewster of Pennsylvania’s 45th Voting District with an award for his efforts surrounding Senate Bill 147 and his continued support of conservation and the sportsmen and women of the state.

The award was presented by Harold Daub, Executive Director of Pennsylvania Federation of Sportsmen and Conservationists during the September 10, 2020 meeting at Pitcarin-Monoreville Sportsmen’s Club of the Allegheny County Sportsmen’s League.

The award reads: 2020 Legislator of the Year presented to Jim Brewster for working diligently on behalf of hunters, trappers, anglers, and conservationists.  For Supporting science-based wildlife management by our wildlife resources agencies.  Dated March 14, 2020.

Senator Brewster said this about receiving the award; “I am pleased and humbled to receive the 2020 Legislator of the Year award from the Pennsylvania Federation of Sportsmen and Conservationists.  Together, along with the leadership and members of the federation, we have worked hard on key issues and have had success in addressing the needs of sportsmen and women.

“Under the leadership of Harold Daub, the federation has been an active and effective advocate for change.  I want to thank Harold and all the members of the federation for the award and recognition and I look forward to continuing to be a strong voice in the Senate for sportsmen and women for years to come.”

Harold Daub, PFSC Executive Director commented; “It is nice to recognize persons within our legislature that are working hard for sportsmen and conservation in this state.  It is my hope that I can present awards like this as often as possible to legislators that work as hard for sportsmen and women as Senator Brewster.  I welcome the opportunity to recognize a true friend of conservation and sportsmen in Pennsylvania, and thank Senator Brewster for his efforts in supporting our outdoor heritage.”

PFSC DOES NOT SUPPORT THE CURRENT AMENDED LANGUAGE FOR HB 2724, PRINTER # 4197 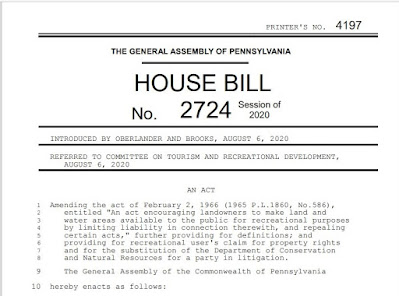